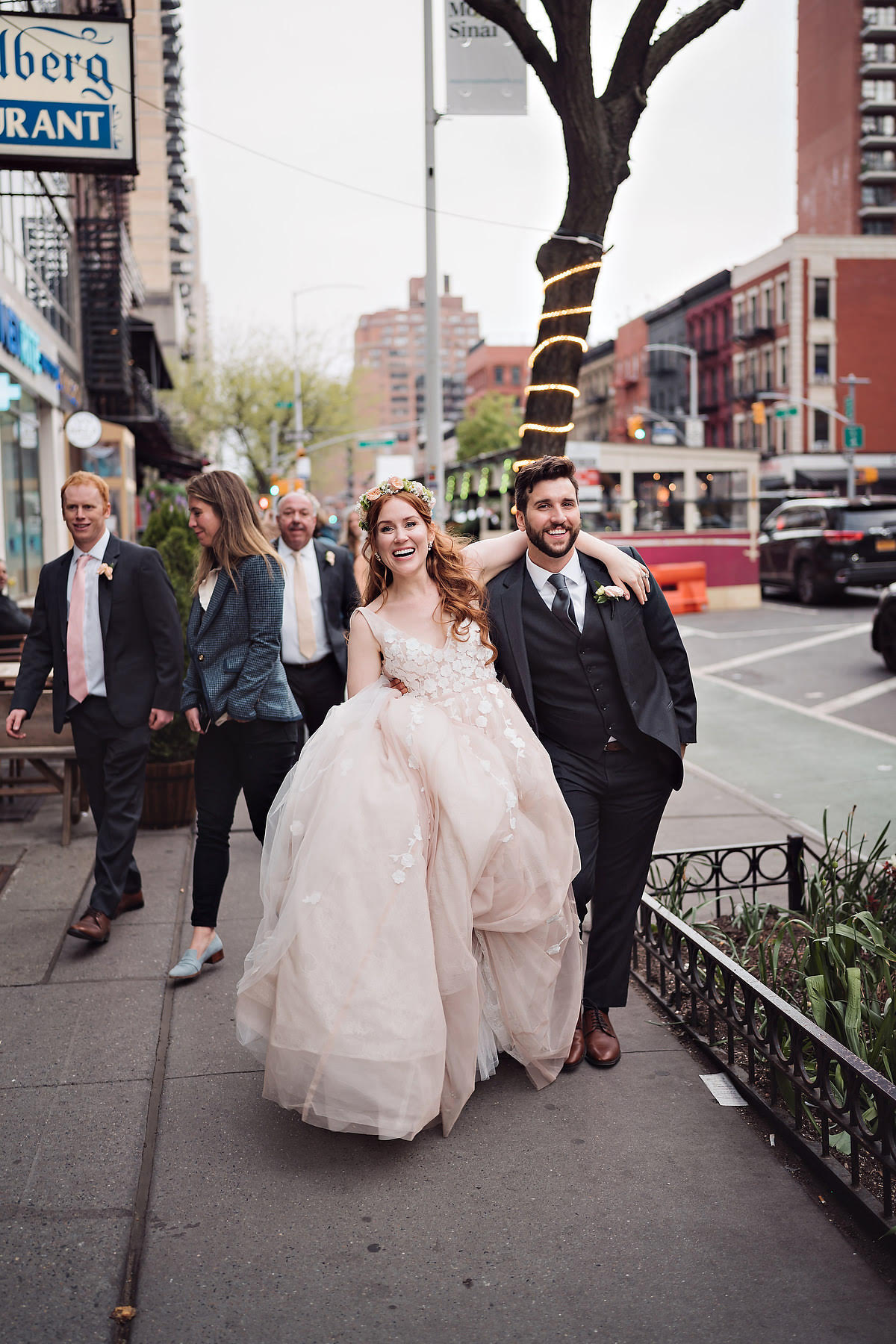 It was Happy Days all round when Hollywood director Ron Howard recently officiated his actress daughter’s wedding in New York’s Central Park – and it was a touch of New Zealand that made the star-studded big day even more magical!

“It’s uncanny, right?” grins Katie, 43, from her Hera Couture workroom in Auckland. “Paige had actually bought her first dress in 2019, but the wedding went on hold due to the pandemic and, two years later, she felt that dress wasn’t her any more. “During that time, she and her now-husband Tim Abou-Nasr regularly walked in Central Park, and they loved seeing all the flowers and greenery throughout the seasons, so she decided she wanted a pink dress adorned with flowers.

“Paige went on Pinterest, as all brides do, and came across our Lavant gown in blush pink with hand-cut sakura [cherry blossom] petals. She couldn’t believe the dress was all the way from New Zealand. “She sent me a message on Instagram and I was like, ‘This must be a fake account!’ But I saw that she was followed by Ron and her actress sister Bryce Dallas Howard, so we started chatting.”

With only three months before the nuptials, Paige, 37, gave Katie her measurements and the gown was sent over to the US. Thankfully, it was a perfect fit with no adjustments required. Actress Paige – who starred alongside Kristen Stewart in Adventureland, and appeared in Arrested Development and 90210 – wrote on social media that it was the most beautiful gown she had ever worn. “The minute I put it on, I lit up like a Christmas tree! I’ve never felt this way about a gown before. It’s true love.”

Her sister Bryce, 41, who stars in the upcoming Jurassic World Dominion, added that when Paige walked down the aisle, “We literally gasped.” Their famous father Ron, 68 – who filmed his movies Pete’s Dragon and Willow in Aotearoa – gushed, “Our Paigey looked like the flower goddess she truly is.”

For designer Katie, having her first high-profile US customer is a world away from selling her creations at the Saturday flea markets when she was starting out at age 24. After arriving from Hong Kong with her family as a child, she inherited a love of fashion from her couturier mother. Learning to sew at the age of eight, Katie was taught the delicate arts of corsetry, draping and pattern making. Her artist father even made her a wooden stool so she could reach the pedals of the overlocker. “We came to Auckland with little money and rented a bungalow that felt huge compared to the apartment we’d always lived in,” recalls Katie. “My parents wanted us to grow up around nature. I was the only Asian child in my school, so I had to learn to speak English very quickly. Growing up, my weekends were spent helping mum custom-make gowns for people who wanted one-off special-occasion dresses.”

Though she was immersed in fashion, Katie initially didn’t plan to make it her career. Graduating from university with degrees in property and marketing, her first job was as a property consultant. However, one day, she broke down in front of her dad and admitted she wasn’t enjoying it. He gently replied, “Do what makes you happy.” That afternoon, Katie began sketching bridal designs. “I needed to be creative – fashion is art and expression,” she tells. “It’s a voice where I can have a little influence in the world. I always knew I had an eye for a woman’s silhouette and especially love dressing challenging body types.”

The entrepreneur’s first retail store, Kei Kei Studio, became Hera Couture in 2010. Her one regret? Selling the ivory silk taffeta gown with handmade rosettes that she designed for her own wedding to husband Cliff 13 years ago. Katie – a mum to Chloe, eight, and Chelsea, four – explains, “One of my customers saw me get married and later commented that she wanted to buy it. I thought, ‘Yeah, why not? It’ll pay my rent.’ But in hindsight, I should have kept it for my daughters. “The funny thing was, one of our best friends had offered his vehicle for our wedding car and he’d put new tyres on it that morning. I leant across the car during the photos and then my white dress had tyre marks on it, so my sister-in-law went to the dairy to buy some white chalk to cover it up. Now I tell all my brides to have white chalk on hand!” 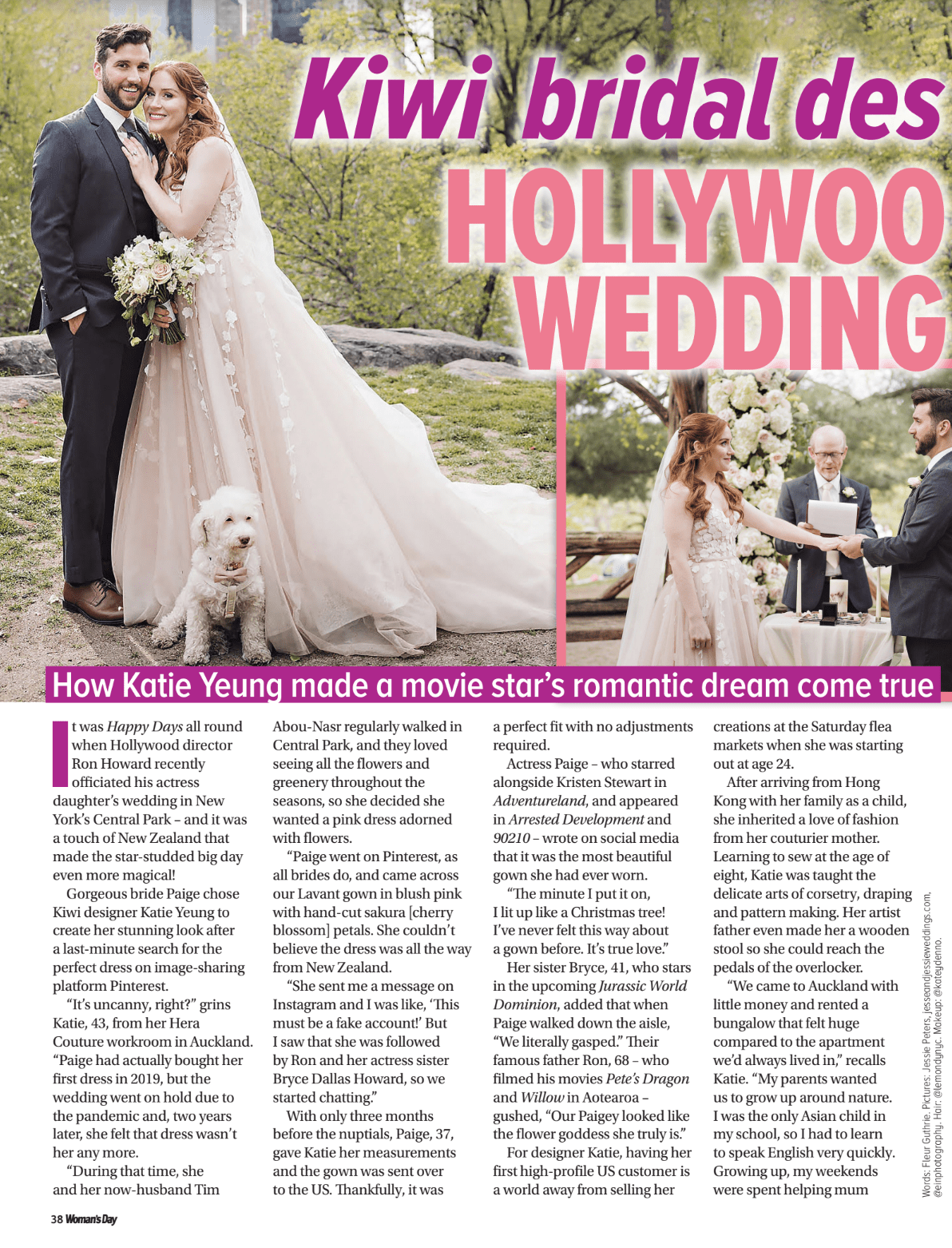 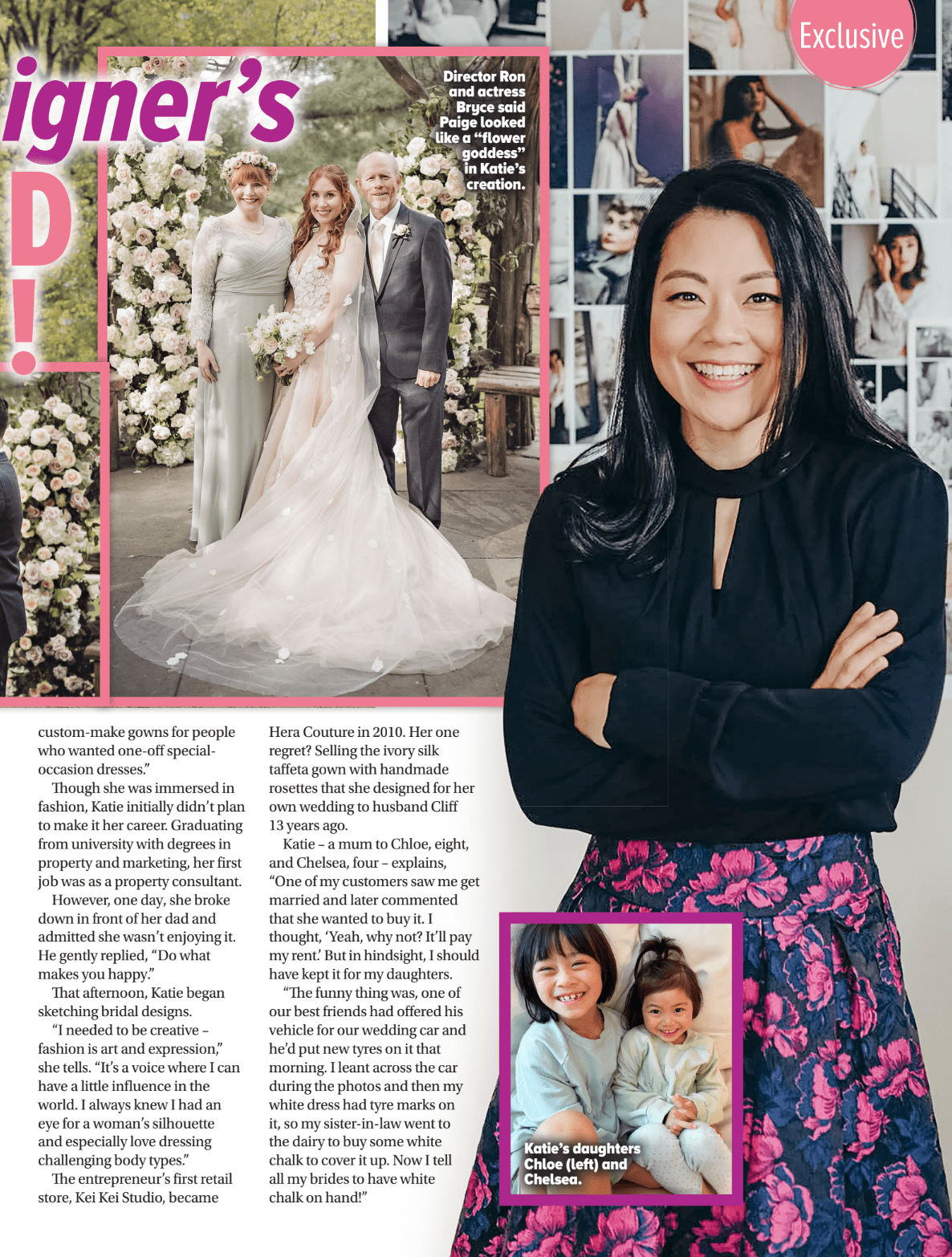 Petra and Dave were married in a stunning family home overlooking Piha beach in Auckland.…

Gorgeous real bride Liz, was a dream client and a bride whose wedding day vision…

Katie sat down with Love Find Co. to discuss life as a female entrepreneur her…

Situated on the outskirts of Havelock North, Pheobe and Tom wed at the beautiful Black…